The Shameless Cast Says Goodbye to the Gallaghers After 10... 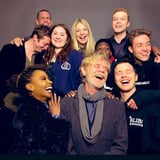 It’s the end of an era. On April 11, Showtime’s Shameless concludes after 11 seasons and plenty of drama within the Gallagher family. The cast practically grew up together over the past 10 years, and their goodbye messages show just how much the series meant to them. Actors Emma Kenney, Cameron Monaghan, Steve Howey, William H. Macy, and more honored all the work that went into their show on Instagram with behind-the-scenes photos and wrap party pictures.

Monaghan summed it up best when he wrote, “It’s closing time. You don’t have to go home, but you can’t stay here. Thanks for being along for the ride.” Get a look at the cast’s sentimental notes, below. We’re already counting down the days before we can binge the full series on Netflix again.

Shameless: Breaking Down Frank Gallagher’s Fate During the Series Finale