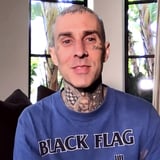 Travis Barker made a virtual appearance on The Drew Barrymore Show on Thursday, and naturally, Drew had to bring up his new romance with Kourtney Kardashian. Even though Kourtney’s name was never actually brought up, the 45-year-old Blink-182 drummer talked about the unconventional love note she recently wrote for him, saying he prefers to go into a relationship “in the blaze of glory and ball of flames.” Um, OK.

Drew also asked Travis for advice about whether it’s better to date someone with kids versus someone who isn’t a parent yet. The drummer admitted that he’s done both, adding that right now he’s “spending time with a woman who’s a great mom, who’s a great friend and you don’t have to worry about any of those things.” Aw! Travis shares stepdaughter Atiana, 21, daughter Alabama, 15, and son Landon, 17, with ex-wife Shanna Moakler, while Kourtney has three kids with ex Scott Disick: daughter Penelope, 8, and sons Mason, 11, and Reign, 6. See what else Travis had to say about his relationship starting at the 4:40 mark in the video above.