SNL Is on a Mission to Ruin Our Childhoods, and... 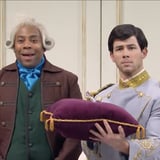 He really didn’t clock the shoe as weird at all??? pic.twitter.com/41OaOcf1r0

Saturday Night Live is on a mission to taint all of our childhood fairy tales and films, and it’s doing a damn good job at it. It turned Ratatouille into an R-rated mess and put the Grinch in a polygamous relationship with some poor Who’s parents, and now it’s tainting Cinderella. And right after we finally got Rodgers & Hammerstein’s Cinderella streaming on Disney+!

During the Feb. 27 show, host and musical guest Nick Jonas put on his finest to play Prince Charming for a reimagined Cinderella ending. The evil stepsisters and stepmother, played by Cecily Strong, Melissa Villaseñor, and Kate McKinnon, continually mock the titular heroine (Chloe Fineman) until the prince brings out the glass slipper. Unlike the classic tale, the slipper is far too small to fit a grown woman, so this doesn’t end with Cinderella marrying her prince and gaining freedom. Instead, it turns out that the shoe belongs to Aidy Bryant’s Mouselina, whom the prince somehow forgot he had hooked up with. His valet Kenan Thompson kept mum because, like all good confidantes, he doesn’t like to yuck anyone’s yum. Watch the full sketch above!