I Feel Personally Attacked by SNL Calling Out Women’s Obsession... 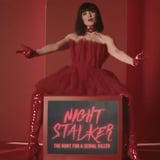 Listen, self-care looks different for everyone – for some people, it’s long, relaxing baths, and for other people, it’s learning the haunting history of people’s gruesome death at the hands of a serial killer. I’m not saying this Saturday Night Live sketch is completely based on my Netflix queue, but there’s a possibility.

During Nick Jonas‘s hosting gig on Feb. 27, SNL called out the phenomenon that is women’s love for streaming all kinds of terrifying true-crime TV shows when they’re alone. Whether it’s Night Stalker, Making a Murderer, or Mommy Dead and Dearest, ladies are indulging in the horrifying while folding laundry, paying taxes, gushing over babies, and basking in sweet alone time. It’s not our fault; it’s relaxing. And although Nick chimes in to remind us that cult shows hold an appeal as well (and baking shows, can’t forget those), let’s be honest, it’s all about the murder shows. Watch the full skit above!