Dax Shepard Wants Fans to Know His Marriage to Kristen... 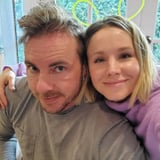 Marriage is a partnership that requires equal input from both sides. Unlike celebrity couples who choose to keep the details of their romantic lives private, Dax Shepard and Kristen Bell have made a point of being open about their marriage highs and lows in an effort to set an example for other couples who know relationships aren’t perfect. “We don’t want anyone to think we met and it’s been easy,” Dax said in an interview on Sunday Today With Willie Geist on Jan. 31. “Because if that’s someone’s expectation of a relationship, and certainly marriage, it’s a bad expectation to have.”

In the past, Dax and Kristen have been open about the fact that their relationship didn’t stem from love at first sight. Like many couples, the pair aren’t strangers to being “at each other’s throats,” but it’s their commitment to understanding and helping one another that makes their relationship work so well. “This isn’t a special fairy tale,” Kristen said in an interview with Parade for the magazine’s March 2019 cover story, before Dax added, “This is two people who worked really hard, and it’s attainable for you if you work really hard in your marriage too.”

One example of the couple’s inspiring dedication to each other has been Kristen’s support for Dax after he publicly opened up about his relapse following 16 years of sobriety. “The thing that I love most about Dax is that he was able to tell me and tell us and say, ‘We need a different plan,'” she told Ellen DeGeneres in October. “We have a plan – if he has to take medication for any reason, I have to administer it. But he was like, ‘We need a stronger plan.’ . . . He’s addicted to evolving. He was like, ‘I don’t want to risk this family and I did, so let’s put new things in place to make sure it doesn’t happen again.’ We’re going back to therapy. I love that he’s addicted to growth. I will continue to stand by him because he’s very, very worth it.”

Amid the hurdles, Kristen and Dax also manage to find time to celebrate one another. “It’s my favorite day of the year!” Kristen captioned a birthday Instagram post for her husband on Jan. 2. “When I get to celebrate the birth of my very favorite human on earth, and spoil him till he rots! The one who’s commitment to growth is astounding, who’s honesty is admirable, and who makes me laugh more than anyone. I love u so dearly.”

After seven years of marriage, the couple still have their fair share of disagreements, but they balance out the lows with plenty of highs, many of which involve their kids. Kristen and Dax are parents to 7-year-old Lincoln Bell Shepard and 6-year-old Delta Bell Shepard, and they seem like pretty freakin’ cool parents if you ask us. See the full interview here and take a peek at some of Dax and Kristen’s funnier marriage hurdles here.