The Crown Cast Dancing to Lizzo’s “Good as Hell” Is... 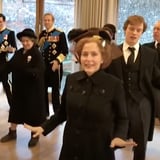 Things we never thought’d we see: Margaret Thatcher and Queen Elizabeth II dancing to Lizzo. OK, so it’s obviously not the real Margaret Thatcher and Queen Elizabeth II, but it is a video of actors Gillian Anderson and Olivia Colman dancing to Lizzo while dressed as their respective characters on The Crown, so it’s almost as good as the real thing.

Gillian stopped by Late Night With Seth Meyers, and it wasn’t long before she was, well, not so pleasantly surprised with the video in question. “Well, Olivia apparently does a dance class with a bunch of friends on a regular basis, and last time she did the class, they had danced to that Lizzo song. She asked if we would happen to be interested in doing it and videoing it and she would just share it only with her friends,” Gillian said after Seth questioned her about how the dance came about. “So [the video] was never meant to see the light of day [. . .] but here we are.”

The video shows 10 cast members of The Crown dancing to Lizzo’s “Good as Hell”, and it’s just as fabulous as it sounds. Look closely and you’ll also spot Princess Margaret (Helena Bonham Carter), Princess Anne (Erin Doherty), and Prince Charles (Josh O’Connor) in the background of the clip. Oh, and did we mention that they’re all in character costume? “So humiliating,” was Gillian’s verdict.

Watch the full video above to see the epic Lizzo dance and Gillian’s reaction.