Christopher Meloni and Mariska Hargitay Team Up For Law &... 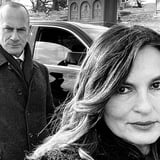 Christopher Meloni is going back to his Law & Order: SVU roots. The actor is set to reprise his beloved character, Elliot Stabler, on a new NBC series created by Law & Order mastermind Dick Wolf titled Law & Order: Organized Crime. The show, which has already been ordered for 13 episodes, will follow Elliot in his new position as the head of the organized crime division of the NYPD. However, according to NBC, “the city and police department have changed dramatically in the decade he’s been away, and he must adapt to a criminal justice system in the midst of its own moment of reckoning.”

Meloni starred on Law & Order: SVU for 12 seasons before his departure in 2011. In season 13, it was revealed that his character retired from the police force, so we’re interested to see how the new show fills in the gaps. Originally, the series was supposed to premiere as early as January 2021, but has since been delayed to sometime in spring 2021. Most recently, Mariska Hargitay shared a glimpse of her and Meloni on set of the spinoff with the caption, “It’s all happening.” We can’t wait until the show officially premieres on NBC!