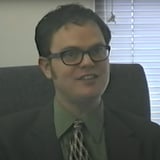 Although it might seem like Rainn Wilson was born to play Dwight Schrute and there couldn’t possibly be another Michael Scott other than Steve Carell, it turns out The Office almost had a totally different cast. Back in 2003, the show held auditions for its NBC pilot, and you might be surprised by some of the stars who tried out. Thanks to a video posted by The Office‘s YouTube account on Jan. 21, we finally got a short glimpse at the casting process.

Actors like Seth Rogen, Adam Scott, John Cho, and Kathryn Hahn sat in front of the camera for a chance to become part of the beloved comedy series. But really, can you imagine a world where anyone else plays Jim or Pam? I know I can’t. Luckily, the final cast’s auditions are included, so we can see what won the creators over in the first place. Check out the fun, nostalgic video above.