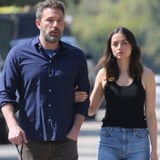 Ana de Armas and Ben Affleck have reportedly split after nearly one year together, People confirms. “Ben is no longer dating Ana,” a source told the publication. “She broke it off. Their relationship was complicated. Ana doesn’t want to be Los Angeles-based and Ben obviously has to, since his kids live in Los Angeles.”

Ben and Ana were first linked in the spring of 2020, around the same time that Hilarie Burton released her memoir, in which she opened up about Ben groping her during an episode of MTV’s TRL. Ben previously made a public apology to Hilarie in a tweet, writing, “I acted inappropriately toward Ms. Burton and I sincerely apologize.”

After their initial meeting while filming the upcoming thriller Deep Water in New Orleans, Ana and Ben took a trip to Cuba and Costa Rica together. Shortly after Ana confirmed their relationship on Instagram in August, she moved into Ben’s LA house. There, Ana spent quality time with Ben’s children from his previous marriage to Jennifer Garner, including 14-year-old Violet, 11-year-old Seraphina, and 8-year-old Samuel.