WandaVision Has Already Dropped Hints About the Secretive Marvel Organization,... 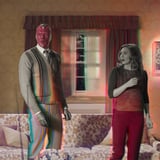 If you’ve tapped into the Marvel Cinematic Universe at some point this past decade, you’ve likely heard of S.H.I.E.L.D., but we’ve got a whole new acronym to pay attention to in WandaVision: S.W.O.R.D. Weaponry puns aside, what is S.W.O.R.D.? In the comics, it’s an organization that counters threats of the alien variety – think S.H.I.E.L.D. in space. Let’s break down what exactly S.W.O.R.D. does and how it fits into the Scarlet Witch’s story and the MCU – the first two episodes have definitely given us hints about it!

In the Marvel Comics, S.W.O.R.D. stands for Sentient World Observation and Response Department. Dealing with out-of-this-world situations, it’s a subdivision of S.H.I.E.L.D. (Strategic Homeland Intervention, Enforcement, and Logistics Division). S.W.O.R.D. is even more secretive than S.H.I.E.L.D. as it handles extraterrestrial threats – in fact, it’s fairly independent of its parent organization. Its equivalent of Nick Fury (Samuel L. Jackson) is a half-human and half-alien commander named Abigail Brand. Brand and her team of aliens and humans monitor extraterrestrial activity from a space station in Earth’s orbit called The Peak.

Related: One of Wandavision’s Biggest Mysteries Revolves Around Vision

In the context of the show, we don’t really know much about the organization so far. S.W.O.R.D.’s signature cross symbol appears on the toy helicopter and the beekeeper in episode two, but the first batch of episodes only hint at something being wrong with Wanda. It’s important to note that the acronym stands for something slightly different on WandaVision. On Topps’ collectible card designs for the series, S.W.O.R.D. is actually Sentient Weapon Observation Response Division. If we’re talking about sentient weapons, it’s not a far stretch to consider Vision one.

Of course, this alteration to the acronym doesn’t mean that we won’t see aliens and space battles, or at least some gateway into them. One of the characters on WandaVision is a grown-up Monica Rambeau (Teyonah Parris), the daughter of Carol Danvers’ friend Maria. (Remember, Captain Marvel takes place in the ’90s!) Captain Marvel deals extensively with human and alien relations, so Monica’s story and S.W.O.R.D. may still usher in a new space-centric chapter of the MCU (that perhaps connects it to the X-Men). Parris actually first shows up as a friendly woman named Geraldine in the second episode, though we wouldn’t be surprised if she’s on a covert mission of sorts.

No matter how extensively a role S.W.O.R.D. plays in WandaVision, it’s likely that it will have a pivotal part in upcoming Marvel projects.