What Happened to the Dating Game Killer? The Details of... 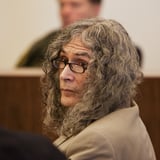 Before the days of careful vetting and extensive background checks, Rodney Alcala appeared on The Dating Game in the middle of his killing spree in the late ’70s. While Alcala became known as The Dating Game killer, his involvement on the reality TV show was but a brief moment in his deadly history – investigators believe that he killed at least eight people and suspect that he potentially murdered over 100 others. In a recent special, 20/20 took on Alcala’s terrifying story, which has often been compared to Ted Bundy’s. Ahead, we’ve pulled together what you need to know about The Dating Game killer and where he is today, but do be warned that the details are disturbing.

Loosely similar to The Bachelor, ABC’s The Dating Game became a television phenomenon in the 1960s. The show typically followed a format where a bachelorette would question three bachelors who were hidden from her view. By the end, the woman would choose one of the three and go on a date with him with expenses paid by the show. Alcala came onto the show in 1978, even though he had served time after raping and attacking 8-year-old Tali Shapiro in Los Angeles a decade before. (He went as far as assuming a fake identity in New York for years before police tracked him down for this crime.) The bachelorette Cheryl Bradshaw ended up picking Alcala, who the show marketed as a successful photographer. After the show, Bradshaw actually declined to go on a date with Alcala, sensing that something was off about him. She told contestant coordinator Ellen Metzger, “Ellen, I can’t go out with this guy. There’s weird vibes that are coming off of him. He’s very strange. I am not comfortable.”

Alcala is often called The Dating Game killer because it was later found that he had killed several people, mostly women, before appearing on the show. Two years after the show, Alcala was convicted and sentenced to death for the murder of 12-year-old Robin Samsoe, who disappeared in June 1979 while on her way to a dance class. Investigators discovered Samsoe’s remains in the San Gabriel Mountains two weeks after she disappeared. While going through Alcala’s belongings, law enforcement found predominantly explicit pictures of women, girls, and boys in his storage locker. The Huntington Beach Police publicly released some of the photos, hoping to identify other victims or survivors.

Alcala went to trial three times for Samsoe’s murder, two of his convictions overturned on appeal. In March 2010, he was sentenced for a third time, again receiving the death penalty. Between the trials, investigators found that he murdered at least seven people: 23-year-old Cornelia Crilley in 1971; 23-year-old Ellen J. Hover, 18-year-old Jill Barcomb, and 27-year-old Georgia Wixted in 1977; 32-year-old Charlotte Lamb in 1978; and 21-year-old Jill Parenteau and 12-year-old Robin Samsoe in 1979. Detectives believe that it’s highly likely that he had more victims. In 2016, he was also charged with murdering 28-year-old Christine Thornton in 1977 after her family found her picture in the batch of Alcala’s released photos. Authorities decided against extraditing Alcala to Wyoming for trial due to his declining health.

77-year-old Alcala is currently serving time at Corcoran State Prison. His execution has been postponed indefinitely after California passed a moratorium on the death penalty in 2019.