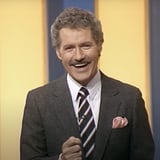 Alex Trebek’s final episode of Jeopardy! officially aired on Jan. 8, along with a special tribute to the late host. At the end of the broadcast, the show shared a nostalgic montage featuring sweet moments throughout Trebek’s 37-season tenure as the series emcee. The video homage – which is set to Hugh Jackman‘s rendition of the Peter Allen song “Once Before I Go” – includes clips of Trebek dancing, dressing up in costumes, and delivering some of his signature quips on the show. “Forever in our hearts, always our inspiration,” a message reads at the end.

Trebek taped his last episode of Jeopardy! on Oct. 29, about a week before he died at the age of 80 after battling stage four pancreatic cancer. The show will return on Jan. 11 with former champion Ken Jennings as the guest host. The Los Angeles Times confirmed that Katie Couric will also serve as a guest host amid the search for Trebek’s permanent replacement.