Tile to launch to launch a new tracker powered by...

Tile is preparing to introduce a new product this year that will serve as a rival to Apple’s long-awaited AirTags and other lost item trackers coming to the market, including those from Samsung, TechCrunch has learned. While previous Tile trackers have leveraged Bluetooth to help users locate lost items — like a misplaced set of keys, for example — Tile’s new product will take advantage of UWB (ultra wideband) technology to find the missing items. It will also use augmented reality to help guide users to the lost item’s location via the Tile mobile app.

Like Bluetooth and Wi-Fi, UWB is a short-range, wireless communication protocol, but one that operates at very high frequencies. It can be used to capture spatial and directional data, which is where it comes in handy to lost item finders, like Tile’s trackers.

Apple last year began to give third-party developers access to its U1 chip, which uses UWB technology to make the iPhone spatially aware, via its “NearbyInteraction” framework. Some Android devices also ship with the technology. It’s unclear to what extent Tile is using the new frameworks with its forthcoming product, and the company is likely under NDA with regard to its work with Apple specifically, per earlier reports.

Based on Tile’s internal concept art for the device (shown below), Tile’s UWB model will look similar to its other small trackers, like the Tile Mate and Tile Pro. It will also have a square shape, center button, and flat back to support being mounted using an adhesive. And like other Tile dongles, it can be attached to a keychain.

Typically, Tile dongles would be attached to things like keys, remote controls, handbags, duffels, luggage, or other small carry items, or stuck to larger devices like personal electronics or bikes. However, lost items could only be located by way of Bluetooth, when nearby, or via Tile’s “community find” network when further away. The latter leveraged the Tile app installed on its users’ phones to help locate any Tile tracker set to a lost mode, then ping the item’s owner when the item was found. This has allowed Tile users in the past to locate lost items like those left on an airplane by mistake, for example.

The new Tile tracker, on the other hand, will use UWB to make the finding process easier than before.

Because UWB offers spatial awareness capabilities, it will be able to locate missing items inside or outside, even when you can’t hear the tracker’s ring. This could help when the missing item is buried under something — like a sofa cushion — or inside something like a dresser drawer, for example. It can also help to find items more easily in a larger space, like a house with multiple floors. 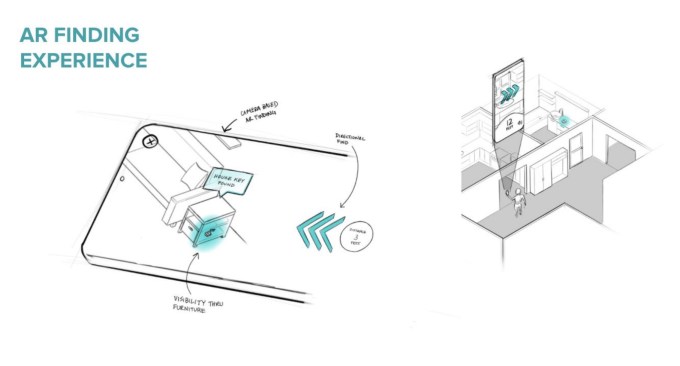 Per sources familiar with Tile’s plans, we understand Tile expects to release the new tracker later this year with support for both iOS and Android devices. Pricing is unknown. Tile will still sell its popular Bluetooth-enabled devices, of course, as a good portion of the market does not yet own a UWB-enabled smartphone at this time — the technology is only found in newer devices.

Though Tile has historically led the market in comparison with other third-party lost item trackers, the company is due to face increased competition in 2021 as new trackers arrive from top smartphone brands, like Samsung and Apple.

At the 2020 Samsung Galaxy Unpacked virtual event, Samsung discussed its plans to integrate UWB into a new SmartThings Find application. This week, its upcoming Samsung Galaxy SmartTag tracker was spotted in images provided to the certification authority NCC. The device very much looks like a Tile tracker, with its square-ish shape and keychain hole, for instance.

Meanwhile, according to a new research note from analyst Ming-Chi Kuo, Apple will reveal its own Tile competitor, AirTags this year. Apple has already all but confirmed AirTag’s existence, as it even accidentally published references to its lost item tracker in an official support video at one point. Leaked images of the AirTags also began to circulate this week, adding fuel to these reports of a “soon-ish” AirTags launch.

A UWB-powered tracker could help allow Tile to maintain its position in the market. Tile, as of last year, had sold 26 million Tile devices, and was locating around 6 million items per day across 195 countries. Tile’s website now says its devices reach over 230 countries and territories. With this scale, Tile today leads the market. But Apple’s AirTags could have a first-party advantage with deep integrations into its “Find My” app  — a concern that was brought up by Tile in last year’s antitrust hearings in reference to how Apple wields its platform and market power to overrun competitive businesses.

Tile is not speaking publicly about its plans for a UWB device at this time.

“While we can’t comment on our product roadmap, we’re constantly looking to improve our customer experience and solve the pain point of finding lost items,” a spokesperson for Tile told TechCrunch.