Jimmy Kimmel Predicted The Bachelor Winner, and We Think He’s... 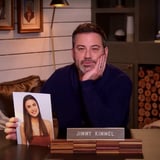 By now, you’re likely familiar with Jimmy Kimmel’s wizard-like knack for predicting the winners of The Bachelor and The Bachelorette. With input from his wife, Molly McNearey, the late-night host accurately foreshadowed that Hannah Ann Sluss would secure Peter Weber’s final rose (which later went south), Jed Wyatt would win Hannah Brown’s season (which also later went south), and the list of spot-on guesses goes on as long as a CVS receipt. Following the premiere of Matt James’s Bachelor season on Monday, Kimmel chatted with the North Carolina native and revealed his thoughts on who will be the final woman standing, and TBH, we think he’s onto something yet again.

After grilling James about controversial contestant “Queen” Victoria Larson, Kimmel shared his picks for the top three: Bri Springs, the 24-year-old communications manager from San Francisco; Abigail Heringer, the 25-year-old client financial manager and first impression rose recipient; and Rachael Kirkconnell, the 24-year-old graphic designer from Georgia. Which of the three does Kimmel and his wife think will ultimately be James’s future bride at the end of his season? Watch the interview above to find out (and to see him adorably smirk at the mention of one contestant in particular!).