In a Wild Turn of Events, Harry Styles Might Be... 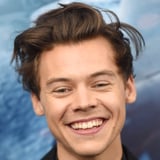 Sorry Harries, it looks like our man is starting 2021 off the market. Over the weekend, Harry Styles and Olivia Wilde were seen holding hands while attending the wedding of Harry’s agent. The pair were later photographed with their luggage at the 26-year-old singer’s LA home, further fueling those dating rumors. A source told People, “They were affectionate around their friends, held hands, and looked very happy. They have dated for a few weeks.”

The duo recently worked together on the film Don’t Worry Darling, which Harry stars in and Olivia costars in and directs. “What started out as a close friendship, quickly turned romantic,” another source told People. “Everyone saw it coming. During breaks, he hasn’t been able to stay away and visited her trailer.” Back in November, Olivia defended Harry after Candace Owens’s comments about his historic Vogue cover, tweeting “You’re pathetic.” The 36-year-old actress was also quoted in the Vogue issue, saying, “It’s pretty powerful and kind of extraordinary to see someone in his position redefining what it can mean to be a man with confidence.”

Olivia and partner Jason Sudeikis ended their engagement after nine years together in November 2020. “It’s been amicable and they’ve transitioned into a great co-parenting routine,” a source told People about the split. “The children are the priority and the heart of the family’s relationship.” Harry has most recently been romantically linked to model Camille Rowe, chef/food blogger Tess Ward, and Kendall Jenner.