The Office: Dwight Enters the Matrix in Never-Before-Seen Cold Open 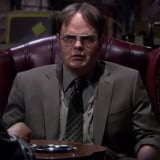 The Office has unveiled a never-before-seen cold open to ring in the new year and celebrate the show’s move from Netflix to Peacock. On Jan. 1, the series released the clip, which shows Jim (John Krasinski) and Pam (Jenna Fischer) tricking Dwight (Rainn Wilson) into believing that he’s in The Matrix‘s simulated reality of the same name. They send a series of signs and messages that lead Dwight to a warehouse where Hank the security guard (played by the late Hugh Dane) greets him while wearing a leather coat and a pair of sunglasses – ya know, classic Matrix attire.

Hank then tells Dwight the “truth” about The Matrix, though the Dunder Mifflin regional manager isn’t buying it at first. “But the Matrix isn’t real,” Dwight says. “It’s a trilogy of flawless, life-changing films, and an online game.” But after some convincing acting on Hank’s part, Dwight finally chooses between a red pill and a blue pill.

The segment was cut from the show’s ninth and final season, which aired from 2012 to 2013. We can’t believe NBC kept this gem from us for over seven years, but at least we get to enjoy it now. Watch the video above before the system failure hits!